How can Solar Panels Benefit the Farming Scene in India? 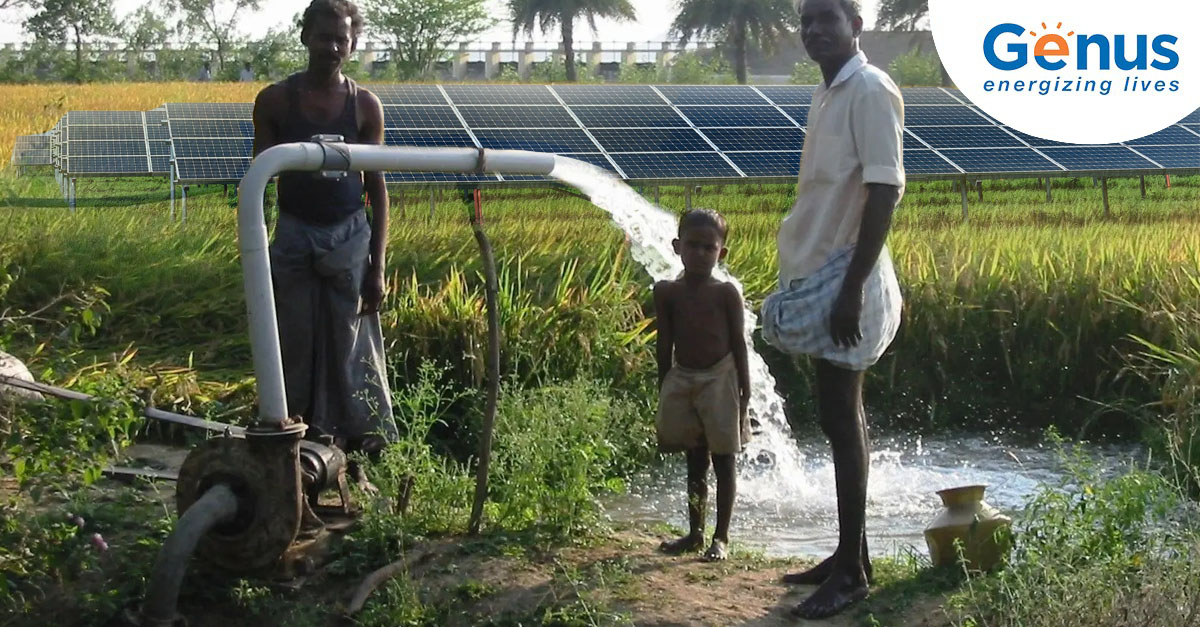 Farming is a labour-intensive job that requires months or even years of hard work. Crop yields are also largely unpredictable, and to make matters worse, farms need to deal with inconsistent monsoons and poor electricity infrastructure.

But what many farmers in the country have going for them is India’s tropical climate, which means that solar panels for farms can be a great way to meet a farmer’s electricity and water needs. Here is how using solar power for agriculture can reduce a farmer’s dependence on monsoons and the electricity grid.

By using a solar system for farmers, it is possible to do away with the dependence on unreliable power supply and rainfall that is both seasonal and inconsistent. Furthermore, the switch to solar from diesel is a win from an environmental perspective.

Since farmers need to work with poor power supply that is often a reality in rural or remote areas, they tend to leave their pumps on all the time. This practice not just wastes electricity, but also negatively impacts groundwater levels.

The use of highly efficient solar panels for agriculture can change this scenario though, as farmers will have access to constant power supply whenever they need it, so they don’t have to leave their pumps running all the time.

Consequently, they will save a lot of money on electricity bills and also prevent groundwater reserves from getting depleted.

Farming can sometimes be quite expensive due to the cost of fuel for running various machines. Luckily, solar can be a great fix for that!

Solar power plant cost per acre has dropped substantially because of the 70% drop in the cost of solar modules over the last four years. Consequently, tools, such as solar pumps have become financially viable for farmers.

Also Read: What Are Soft Costs In Solar Systems And Ways To Minimize Them

However, it is worth noting that an agricultural solar system is currently a good option only for farmers willing to wait several years before deriving value out of it.

For instance, the upfront cost of a solar pump of 2 HP, which is sufficient for irrigating about 5 acres, is around 10 times that of a conventional pump, but the fact that it can run nearly 25 years with almost no overhead and management cost makes it a worthy investment.

To support the farming industry—especially its irrigation needs—India makes use of over 4 billion litres of diesel and nearly 85 million tonnes of coal every year. It is estimated that even if half the diesel pumps in India were replaced in favour of solar farming, then the nation’s diesel consumption would drop around 7.5 percent.

Increasingly, consumers across the world are concerned about the carbon footprint of what they eat. With the help of solar panel farms, Indian farmers can emerge as leaders in catering to people who are concerned with the sustainability of farming practices.

Also Read: What Are The Top Benefits of Using Solar Power in Rural Areas?

Solar panels for farms can greatly transform the agriculture sector in India by providing farmers with cheap electricity for everything from pumping water to harvesting crops. Moreover, solar energy farming will enhance the livelihoods of small to marginal farmers by increasing the chances of bumper crop yields even in places with insufficient electricity supply.

To know what kind of solar panels are right for you, feel free to reach out to Genus. We have a dedicated team that can provide the help you need to run a high yielding and cost-effective solar farm.

nextWhy Solar Farms in the Ocean can Save the Planet?