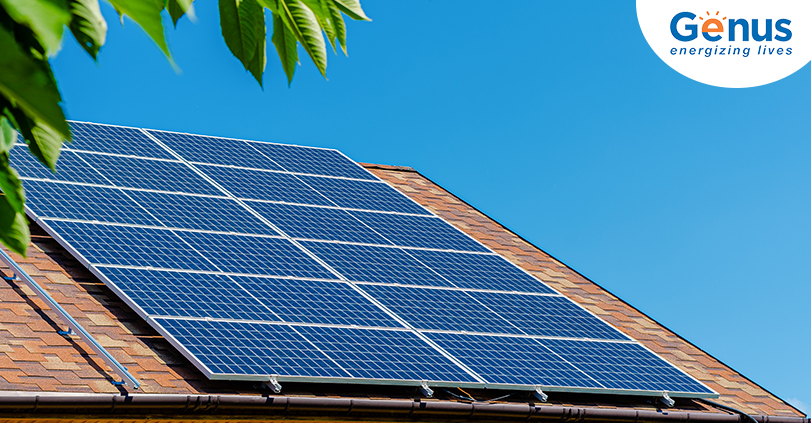 The introduction of alternative energy sources such as solar is gradually transforming towns and villages of India. Even though installation of solar panels can be seen in homes and factories, there is still largescale skepticism related to the financial aspect of installing solar systems. While solar installations may seem like a costly investment, there is a solution to enhance the efficiency of such installations: Solar Battery Storage.

What is Solar Battery Storage?

A solar energy system comprises of a network of devices such as solar panels, scaffoldings, and structures for mounting the panels, an inverter, a battery solution, and a performance tracker to measure the electrical energy. The solar panels convert solar energy into electrical energy, which is then supplied to the inverter. The inverter is needed to convert the direct current (DC) power generated from the panels to the alternative current (AC) power which can then be used by the home appliances. The storage system or a battery is also connected to the above network accounting for enhanced energy and cost-efficiency.

Solar batteries store solar energy produced by the panels for later usage. A solar battery may have an inverter, which functions as an integrated system to store and provide energy. A battery’s capacity determines the amount of solar energy it can store. The depth of discharge (DoD) is often used to measure the amount to which a battery can be leveraged relative to its total capacity. For instance, a battery with 100 percent DoD can be used up to its maximum storage capacity. Similarly, a battery with a 94 percent DoD means that 94 percent of its storage capacity can be used before the battery must be charged again.

The standard solar power system is connected to the electric grid. In case of an energy shortage, energy is drawn from the grid. Thus, the consumer is billed for using grid electricity as well. Alternatively, solar batteries store any extra energy that can be used when the energy from the solar system doesn’t suffice.

A solar battery is a secured source of energy which is especially useful for the regions where grid electricity is unreliable. It is also useful if a consumer wants a greater degree of control over his energy requirements. Thus, solar battery can be an asset for energy-critical processes as well.

With less dependency on the grid energy, solar battery installation will enable the consumers to save huge on their electricity bills. It will also mean that any extra energy can be sold off to the grid.

Solar battery storage makes your place self-sufficient and energy-independent. By going solar, you also go-green and reduce pollution. This in turn, reduces the carbon footprint, which is a massive step towards contributing to the well-being of the environment and the planet.

We often rely on diesel generators when there is an unexpected power cut off. But these machines are extremely noisy, and consume a lot of energy at the cost of polluting the environment. However, when you invest in solar storage batteries, you can reduce the air and noise pollution in your surroundings.

Also Read: What is a Solar Conversion Kit and How It Works?

Optimum utilization of renewable energy resources will keep the environment clean. Solar power is one of the most useful energy resources which needs to be utilized and stored. You only have to worry about the solar battery cost once. After you have installed this system in your place, you can make your place energy efficient.Now is the time to invest in the solar battery storage and get rid of the unwanted extra expenses.