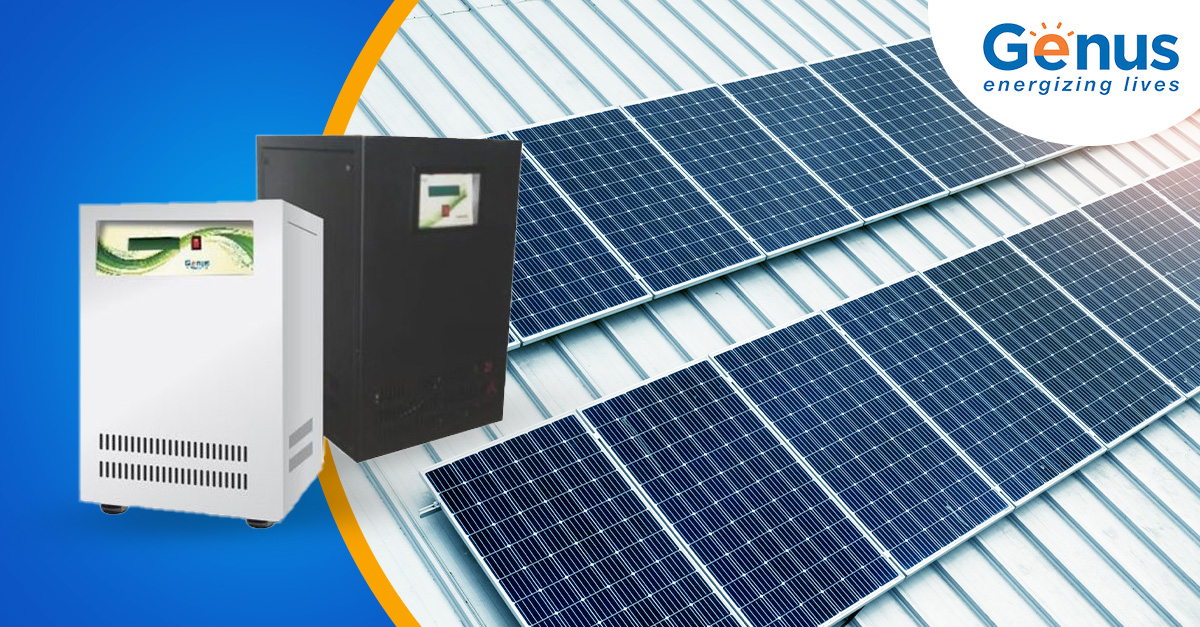 In the past few decades, one of the most prominent environmental changes has been the gradual shift towards renewable energy. The need for alternative energy resources has led industries and businesses to invest in renewable technology such as wind, biomass, solar and more. Among the renewable resources, solar energy is the most popular and fastest-growing energy resource. As a result, several advancements have been made in solar inverter technology. Primarily, there are three types of solar inverters available in the market: Off-grid Solar Plant, Grid-tied Solar Plant and Hybrid Solar Plant.

To understand the difference between the three, it is important to understand the role of an inverter. An inverter is primarily used to transform the direct current (DC) to alternating current (AC). Narrowing down to solar energy systems, an inverter happens to be one of the most vital elements of the entire system as it also determines the amount of energy that is to be directed to the household appliances. Now that we know the role of an inverter, let us look at different types of solar inverters:

On-grid or grid-tied inverters used in solar energy systems are connected and synced with the power grid so that excess power generated can be fed to the grid. These are the most widely used setups at homes as well as businesses. The key advantage of an on-grid inverter is that it does not need batteries. Instead, such systems use either micro or solar inverters that convert DC to AC from the solar panels. Any excess power generated in the process is transferred to the utility grid and the customers get a credit for the amount of energy exported. The practice is also known as net metering. Thus, an on-grid connection allows you to save more money through net metering, improved efficiency rates and lower installation and equipment costs.

However, one of the biggest challenges of a grid-tied system is in case the grid goes down, electricity would not be accessible unless you include a battery backup system as well.

As the name suggests, an off-grid system despite being connected to the utility gridutilizes solar power to charge the battery and run the load. It uses the grid power only when the solar power is not enough to serve the load or charge the battery.  The two key factors in an off-grid system are their design and an efficient battery system that can meet the energy requirements, even when there is relatively less amount of sunshine. If there is no battery or any medium to store solar energy, there will be no electricity on cloudy or dark days. Most off-grid solar energy systems are built to generate extra energy during the day which is transferred to the batteries for storage. Based on individual needs, these systems can be sized to produce enough energy during the day so that it covers the household energy requirements.

The key challenge with an off-grid solar inverter is that the electricity production through solar only may not suffice the requirements if there are unusually bad or cloudy weather for several days.

A hybrid solar system is unique in the way that it is connected and synced with the grid but also has a storage solution in place. Despite being relatively expensive, hybrid systems allow the consumers to leverage stored energy in case of a grid failure and also enable them to save on their utility bills via net metering. The major advantage of a hybrid solar system is the continuous power supply for consumers. Further, the maintenance cost of a hybrid system is much lower than that of traditional generators that leverage diesel as fuel.

Overall, any of the above-mentioned inverters can be suitable for the consumers, depending on their specific requirements and budget. Thus, it is important to analyse and understand one’s own energy needs before investing in a solar inverter.